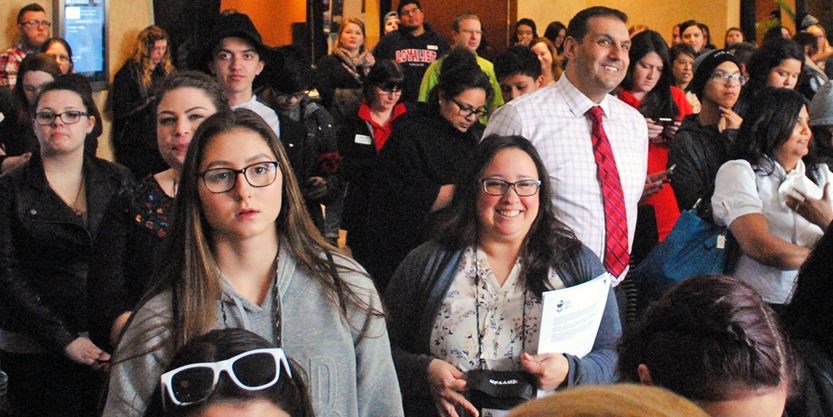 Hundreds of young Indigenous adults in Niagara and some other southern Ontario regions will get access to hands-on skills training in in-demand trades and sectors while helping to build a dozen new affordable homes for Niagara families as part of two multimillion-dollar federal investments unveiled on Wednesday.

About 130 high school-aged Indigenous youth were on hand at the White Oaks Conference Resort and Spa in Niagara-on-the-Lake to hear the Niagara Peninsula Aboriginal Area Management Board (NPAAMB) announce nearly $9 million in federal funding for two initiatives.

The first, called ‘Building Futures,’ will see 180 young Indigenous adults aged 18 to 30 take part in 17-week programs in which they’ll learn building and construction trade skills through a combination of classroom instruction and hands-on experience through work placements and on build sites.

The program, which begins April 16 and which will see various cohorts of participants taking part over four years with $5.79 million in federal funding, is a partnership with Mohawk College, YMCA Employment and Immigrant Services of Niagara, and Habitat for Humanity Niagara. The young adults will take part in helping to build 15 affordable homes, 12 of which will be in Niagara and the other three in as-yet to be determined sites in the other areas covered by the NPAAMB: Hamilton, Brantford and Kitchener-Waterloo.

The second program taking place over two years with about $3 million in federal funding, known as ‘Journey to Success,’ will see about 112 young Indigenous adults taking part in 21-week cohorts in which they’ll receive skills training in the health-care and tourism and hospitality sectors. That program is a partnership with Niagara College and the YMCA’s employment department along with seven other community partners, and begins in May.

The programs, worth about $11 million in total when the contributions of various partners are included, are both designed to support Indigenous youth to better prepare for, get and keep jobs, said Shari St. Peter, executive director of the NPAAMB.

“It’s going to increase the employability of our youth,” she said.

Alistair Davis, CEO of Habitat for Humanity Niagara, said the young adults helping to building affordable homes — including four new homes in Welland this year — will help families to achieve resilience and independence through home ownership. “It’s nothing short of transformational,” he said.

“It’s a very moving experience; you will find it life-changing.”

Davis said young people will also hone skills on the job, learning everything from flooring and electrical work to painting— many of the skill sets that the construction sector in southern Ontario is begging for workers to fill posts in.

“We recognize the skills gap that exists for young people,” he said. “Some of those gaps are widening.”

“Our government has often said that there is no relationship more important than the one we have with Indigenous peoples throughout Canada,” he said.

Badawey told the Indigenous youth that Canada is a country where everyone belongs. “Each and every one of you is at the core of that,” he said.

Participants in the Journey to Success program will receive a certificate of completion from Niagara College. College president Dan Patterson said the program will help open up new doors for Indigenous youth and explore further training, job opportunities, apprenticeships and post-secondary education.

Marie Jones, president of the NPAAMB board, said the investments in Indigenous youth skills training aligns with one of the action calls for youth programs from the Truth and Reconciliation Commission of Canada, established to heal the wounds of the bitter legacy of Indian residential schools that were set up with the goal of wiping out Indigenous culture by forcibly taking children from their families.

“It is in the true spirit of truth and reconciliation,” she said.

Jones told the youth gathered at the tail end of NPAAMB’s annual three-day Opportunity Knocks Indigenous youth career conference that her agency is incorporating Indigenous ways of life and learning into its programs to help youth understand Indigenous culture.

“Our culture is a lifeline to you,” she said. “We are handing that to you and asking you to grab that and hang on tight.”

Jan Longboat, an elder from the Mohawk Turtle Clan in Six Nations who spent the last three days with the young people, said elders used to say the foundation of Indigenous culture is easy to understand.

“It’s a bundle of knowledge and wisdom and action that we put together for our young people so that they can carry on for the next generation,” she said.